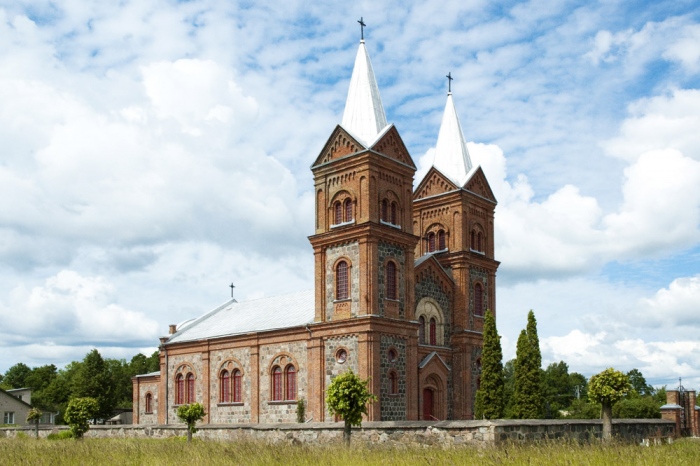 Archeological excavations give evidence that Stirniene and its vicinity has been inhabited since the late Iron Age- the 9th century AD.

In the 1483 chronicle it is mentioned that Stirnen belongs to counts Borchs.

In other chronicle you can read that before the 1710- 11 plague epidemic “ a cat could go from Stirniene to Varaklani along the house fences”.

It is believed that in the 18th century Stirniene became an independent congregation. The oldest inscriptions in the congregation’s metrics books come from 1796. The first churches were wooden buildings which were destroyed by fires.

The construction was run by dean Pavils Virketis who was buried in the church-yard. Stirniene church is a 25.5 m long and 15.3 m wide stone and brick building with a tin-plate roof and two 36m high towers. Inside there are 3 vaults with an arched ceiling which bases on stone pillars. There are three altars, two sacristies and a room for choir singers.

During the World War II the church was heavily damaged, the roof, one of the towers and the organ were destroyed by bombing. After the war the church was reconstructed thanks to deans’ activities and a big support of congregation members. In 1985 the interior was whitewashed, the panel was painted with oil-paint and the altars were gilded. In 2006 the congregation received a gift from Goettingen congregation in Germany- an organ. In summer 2007 it was installed by the specialists of Alvis Melbardis organ-workshop. After a 65 years break Stirniene church organ sounds again to praise God and delight people.

Members of the congregation take part in different activities- they sing in the choir “Reversium”, serve as ministrants, participate in processions.

There are several traditions in the congregation- concerts on Mother’s Day in May, Singing Days for Children and Young people in early August, Baroque music concerts, concerts on St. Cecily’ day, Christmas performances. Following an old tradition, parishioners pray for the deceased singing psalms on All Souls Day and on other commemoration days.

At present the congregation is led by Dean Daumants Abrickis, it collaborates with Varaklani district municipality, Stirniene primary school and Folk house.

On 31st August 1893 Bishop Boleslavs Sloskans – the martyr of Soviet terror and a faithful servant of God – was born in Tiltagals , Stirniene. He was ordained priest in St Petersburg in 1917, secretly consecrated bishop in Moscow in 1926 and appointed apostolic supreme administrator of dioceses of Mogilev and Minsk.

In 1927 he was falsely accused of spying, kept in confinement in 17 Soviet prisons, cruelly tortured until 1933, when he was exchanged for two Soviet spies and could return to Latvia. Sloskans worked as a professor and a spiritual teacher in the Theological seminary in Riga. During the World War II he was taken to Germany, after the war Sloskans was freed and moved to Belgium, where he put himself at the head of the newly founded Latvian Theological seminary. He helped several exile lay students to get education. The Bishop’s motto was- Hostia pro fratribus- sacrifice for brethren.

Everybody who met Bishop Sloskans was impressed by his deep devoutness, cordiality and humbleness, his radiant personality made each meeting an unforgettable experience. His nature could be expressed by his patience and his readiness to sacrifice. Venerable Bishop Boleslav Sloskan, pray for us!